Another recent project finished by the Cadway team (Jonathan Croft and Myself) is the all new Wintergarden facade on the Queen Street Mall, Brisbane, Australia.  The Facade was applied to the revamped Wintergarden on its 3 street frontages.

This was a very complicated project, especially given the timing.  The design was completed by Studio 505 in Melbourne, and the engineering was completed by Tensys.  Urban Art Projects, whom we've teamed up with before (Beacon, Bird Cage, Swallow) was awarded the responsibility of building this amazing design.

Our first hurdle was that each facade panel would be pre-fabricated offsite and lifted into position.  As such, each of the cleats and the dead load beam that was to support the facade panels would be already in place when the facade arrived and we wouldn't necessarily have "as built" survey information for their actual positions.  So we needed to factor in tolerance into everything to allow for these variations!  This included things like slotted holes for connections and adjustable lateral restraints.  The other limitation was the size of the panels, they needed to fit into shipping containers as they were being fabricated overseas...

Our issues in Revit included, everything needed to be scheduled, bolts, nuts, washers, plates, beams, the lot!  We needed to produce shop drawings, with exploded axonometric views, be able to schedule fabricated elements as well as the "assemblies" of fabricated elements.  Unfortunately the Assembly features of Revit were unsuitable for such a task in version 2012 as we couldn't get quantities of the assemblies or have multiple instances of the same assemblies, or have nested assemblies (2 of these 3 limitations have now been lifted in 2013).  The other major flaw was the lack of functionality nesting actual beams.  When nesting a beam family you lose the ability to cut it with a reference plane, or even control its length...

The solution, an elaborate system of shared nested families - some as much as 7 levels deep.  There wasn't as much repetition as we hoped either, as each of the 3 facades had different heights and the scattering of the butterflies on the facade made the regular panels rarely regular!  Our nested families had numerous options built in, so a single family could alternate between many different connection types, which helped keep file size down by having less families loaded with more types set-up.  The other trick was stopping people from using the "mirror" command, unfortunately the fabricators don't have a mirror command... :-D  We again leaned on the Revit API, to automatically isolate fabricated and assembled elements (all tagged of course) and document them in isolation of the rest of the model.  As built surveys were used on some of the facades and dead load beams when they were available and we would modify the panels to suit the variations.

The 3 layers of laser cut panels were handled by Studio 505 directly, whilst we dealt with the 3 structural aspects of the system and the butterfiles.  Termed on the project as the "Mega Panel", "Grillage" and "Access Walkway".  For those interested the Revit model was a conservative 173MB in file size, kept down by the user of "Shared" nested families.  We were able to make the butterflies parametric so they could technically "flap their wings"!

The installation method was interesting as we didn't have access to the whole facade to fit the panels in places.  As such the pieces were lifted through specially designed and positioned lifting points (built into the Revit model for coordination of course), and then a custom designed trolley system would allow the panels to slide along the facade into position.

The fabricators were able to position a projector on the ceiling, projecting the completed panels on the ground, so they could then ensure that the pieces being connected together were correctly located.  The fabrication went very smoothly and efficiently.

As you can see on Studio 505's website the facade has a very elaborate interactive lighting system.  Able to project the silhouettes of those walking past, wave back at you, simulate rain or animals and even display the time.  The project was a success with very little to no coordination issues on site. 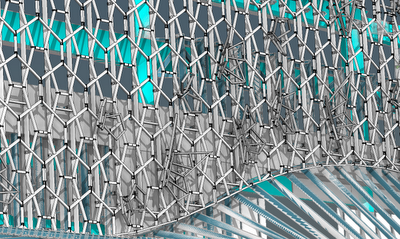 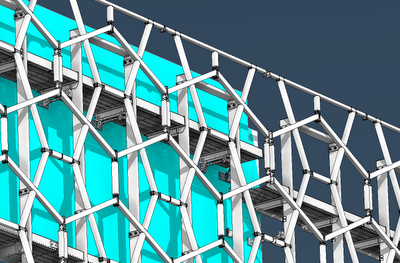 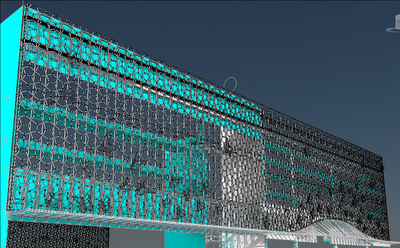